Types of Shrink Packaging Equipment we currently have in stock:

Strictly speaking, shrink wrapping is not considered “flexible packaging.” However, wrapping does use flexible film and foil of various materials and combinations. Many of the general considerations for films discussed in previous white papers on Form-Fill-Seal and pouching machines will apply to wrapping machines as well.

The film used in shrink wrapping is a typically a single layer polyethylene or polypropylene though other plastics and multi-layer films can be used. It is manufactured so that on exposure to heat, it shrinks by about 30 to 80%. If multiple layers of shrink film are to be used, for example to bundle several shrink wrapped trays, the films must be selected so that they do not bind to each other when heated.

Wrapping is also commonly used as a tertiary packaging such as overwrapping an individual carton or bundle of cartons. In the past, appearance of the tertiary packaging has not been considered critical important as the customer never saw it. The rise of club stores like Costco and Sam’s Club has changed this. The 6 pack of canned corn is now the unit of sale in these stores and appearance has become critical to branding. Previously translucent grey film was fine since nobody outside of the stockroom was likely to see it. Now, glossy film with registered graphics is needed to catch the customer’s eye. This affects the choices of machinery that can be used. READ THE REST OF THIS WHITE PAPER: DOWNLOAD PDF Single roll bundlers are a solution.

Single roll bundlers use a single roll of film, cutting pieces to length as they are wrapped around the bundle.

Products are collated into the bundler infeed, typically via a lane divider. These pictures show plastic bottles in a 3 across X 2 long pattern forming a sixpack. Bottles are divided into 3 lanes (6 total in this machine as it runs 2 bundles at a time). A carrier chain with bars pulls a sixpack from the lanes and moves it onto the wrapping section of the conveyor. The slack belts above the bundle help guide and straighten the film as it is wrapped.

As the bundle moves from the wrapping conveyor to the takeway conveyor, the film is pulled up and under the bundle, overlapping the other end of the film.

The takeaway conveyor carries the film bundle to the shrink tunnel where the hot conveyor belt welds the overlapped portions of film and the tunnel heat shrinks the film into a tight conformal wrap.

L-bar shrink wrappers, sometimes called L-bar sealers, are great for a range of applications ranging from single products to bundles at speeds ranging from 1 a minute to 5 – 10 finished packages per minute. The film most commonly used for L-bar sealing is a crystal clear, thin, high gloss which gives an elegant appearance to any package.

L-bar sealers can be completely manual with the operator pulling the film and package forward and manually pulling down the L-bar. They can be semi-automatic with the L-bar pulled down when the operator presses a button and released via timer or they can be fully automatic including product loading.

By its nature, L-bar sealing allows a variety of product sizes to be run with little or no changeover between sizes.

The first thing one notices about L-bar sealing is the film. Most film is supplied in single layer rolls and any folding or forming is done by the machine. Film used for L-bar sealing it normally supplied folded lengthwise in half.

Text BoxIn a simple, manual, L-bar sealer, the film is pulled manually from the roll, over a guide which opens it up. The leading edges of the film are sealed, forming a 2 sided (front seal, back fold) pocket. The product is placed into the pocket, against the back fold and front seal.

The package or bundle is now wrapped on 6 sides and ready for the shrinking in the heat tunnel. The film is hermetically sealed. If sent to the shrink wrapper like this will trap the air inside forming a pillow rather than shrinking conformally. It is therefor necessary to make a pinhole in the film to allow air to escape. Some films are supplied with microperforations while others require a pinwheel or other device to perforate the films during wrapping. Overwrapping machines wrap and fold a paper, foil or plastic film over a product. Instead of welded edges as in a shrink or flow wrapper, all edges are folded. Generally, the film used is not heat shrinkable, resulting in a bit of looseness. Occasionally a shrinkable film will be used to create a tighter, conformal, wrap.

The end result of the folds and corners is a neat protective and/or decorative covering presenting a hand-wrapped, gift-like appearance. Some products use overwrapping specifically as a marketing tool to create this feeling in the consumer’s mind. Common products using folded overwrap include perfumes and cosmetics, CDs and DVDs, playing cards, cigars and cigarettes, bar soap, paper reams and more.

Many shrink wrap bundlers leave the ends of the bundle partially open in a “bullseye” which may be considered unsightly. Bundlers that provide a 6 sided, closed end, seal are available but even these are not hermetic. Shrink wrapped packages need to allow air to escape during shrinking to avoid a pillow effect. If there is no bullseye, the film needs to be perforated to allow air to escape.

Overwrapping can provide a completely hermetic seal. This is advantageous with products that have a pronounced scent such as tea, candles or soap. It can also be advantageous in preventing the product from absorbing other odors or humidity from the storage environment.

Shrink film, in shrinking, can develop considerable force. This can deform or damage delicate products. Paper reams are usually overwrapped rather than shrink wrapped for this reason. Another issue with paper is that it can absorb or give up moisture depending on the ambient humidity. A sealed overwrap prevents this. Since the overwrap is a bit loose, in the event that the paper does absorb moisture and swell, the overwrap can handle it without the warpage that a tight shrink wrap might cause.

Shrink wrappers use a special film that, when heated shrinks to as little as 50% of it’s normal size. This allows the bundle to be loosely wrapped in the wrapper then, when the bundle is passed through a heat tunnel, the film shrinks conformally to the bundle. Modern films are often strong enough to eliminate the need for trays or slipsheets. The double roll wrapper uses an upper and lower film roll with ends welded together to form a curtain. The packages are collated into the final bundle and staged in front of the curtain as shown here. Once in position, a pusher, typically a pneumatic cylinder, pushes the bundle through the curtain: The bundle is now wrapped on 3 sides. Normally the film is wider than the bundle and overhangs the ends.

In the next step, a pair of cutting/sealing blades pinch the trailing section of the film together. This simultaneously welds the film on the bundle side, cuts the film and welds the two ends, reforming the curtain. The bundle is now wrapped on 4 sides and a conveyor carries it to the heat tunnel. In the tunnel, the film shrinks tightly around the bundle. The film overhanging the edges shrinks down around the ends of the bundle pulling it together lengthwise.

This leaves an open end which may be desirable for easier opening and to serve as a handhold for the consumer. If a full, 6 sided seal is desired, additional sealing jaws can be added to seal the ends. Depending on machine design, film, package and bundle configuration, double roll wrappers can run at speeds up to 25-30 bundles per minute. When higher speeds are required, bundlers are available that can run 2 or more bundles at a time by mounting multiple upper and lower film rolls.

Shrink wrapping is an economical way of packaging. Film takes up a fraction of the warehouse space of board, costs less and is easier for the end user to dispose of. Reducing packaging materials makes the product more sustainable and environmentally friendly. It’s a good deal all around.

These machines are often called flow wrappers because of the way the product flows through them. Whatever you call them, they are popular because they are simple and make an attractive package. They can also be wicked fast with some flow wrappers operating at 300 packages per minute or more.

More commonly, they run in the 50 to 150 ppm range. They can be manually fed but their infeed makes them easy to automate. Flow wrappers make a package similar to the vertical Form-Fil-Seal machines I discussed in a previous video. Vertical machines work well with loos products like Jelly beans. They don’t do so well keeping products, like cookies in a tray, collated. Flow wrappers do.

Film can be unregistered with no printing or repetitive printing as shown on the left. In this case the package is made to a specific length. In the case of registered graphics, as shown on the right, even small variations in length would result in out of place graphics. These films will need a registration mark and the machine will need to cut to the mark to keep the graphics in register.

Flow wrapper infeeds are typically a stainless steel tray with side guides to confine the product. A lug chain in the center of the tray pushes the product into the wrapper. An operator or automated feeder places the product between the lugs. Some, higher speed, machines use a series of servomotor conveyors instead of a lug chain. Sensors detect the product and vary the conveyor speeds to space and synchronize the product into the forming shoe. The film feeds off a roll through dancer rolls to control tension. As with all roll fed machines, proper tension control is critical to good performance. The film flows over a forming shoe in time with the lug chain to wrap around the product. Once in the shoe, the product is carried along by the film.

The film folds under and a pair of sealing wheels seal the film lengthwise with a fin seal. Finally, a sealing bar seals the training and leading ends of the package and cuts them apart. Sometimes cutting is forgone to make a continuous strip of packages. A takeaway conveyor carries them to the next packaging step. This is a variation on the typical flow wrapper. The film is fed from underneath, the product placed on top of the film and then the film is wrapped and sealed over the product. Here you can see the longitudinal sealing wheels which are normally hidden underneath.

On this machine, rather than the rotary sealing jaws of the previous machine, a more complex set of jaws is used to provide for extended sealing time.

Now you know how to flow. 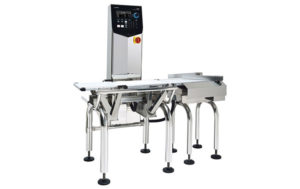