Plug and Play Wrappers In Stock and Ready to Ship Now

Frain has new and like-new Wrappers in stock, thoroughly tested and ready to ship in as little as 48 hours. Give us a call today to get the right Wrappers for your project.

Types of Wrappers we currently have in stock:

See all Wrappers In Stock

The videos below are examples of the Wrappers Frain Carries

Strictly speaking, wrapping, sometimes called overwrapping, is not considered “flexible packaging.” However, wrapping does use flexible film and foil of various materials and combinations. Many fo the general considerations for films discussed in previous white papers on Form-Fill-Seal and pouching machines will apply to wrapping machines as well.

This paper will use the word “wrapping” in a broad generic sense to cover all types of wrapping.

Wrapping is sometimes used as the primary packaging. Some individual candies, cough drops, etc. may be wrapped directly. More commonly wrapping is used as a secondary or tertiary packaging. An example of secondary use is shrink wrapped sixpacks of cans or 24 pack bundles of water.

Wrapping can also be used as a tertiary packaging such as overwrapping an individual carton or bundle of cartons. When used as a tertiary packaging in the past, appearance has not been considered very important since the customer would never see it. The rise of club stores like Sam’s Club and Costco has changed this. The 6 pack of canned corn is now the unit of sale in these stores and appearance has become critical to encourage the customer to buy. Previously translucent grey film was fine. Now, glossy film with registered graphics is needed to catch the customer’s eye. This changes the choices of machinery that can be used.

Higher performance films have allowed the reduction and elimination of corrugated board. These three pictures show the progress of the 1500ml water bottle from an shrinkwrapped tray to a shrinkwrapped slip sheet to shrinkwrap only. This reduces the cost of materials as well as the cost of packaging machinery required.

These are great machines, simple, little to no changeover between products and can run at low to medium production speeds.

Their main drawback is that they can’t run in registration. Colorful graphics on the film attract the customer’s eye as well as provide product information.

To run graphic film, in registration, a single roll wrapper is required. These can run at high speeds, 60 wraps or more per minute. Multiple lanes can make them even faster.

Product is fed to the wrapper in multiple lanes corresponding to the pack pattern.

At the infeed they are separated into 6 lanes and grouped into a 3 across by 2 long pattern. A conveyor carries the 6 packs to the wrapping station where they are timed to the film.

Under the wrapper, 2 rolls of film are unwound and cut to length on the registration mark. A vacuum conveyor carries the film up and positions it about 1” onto the wrapping conveyor.

As the bottles transfer between conveyors, they pull the leading edge of the film under so that it overlaps the trailing edge. The heat tunnel conveyor is sufficiently hot to seal the overlapped film layers.

As they pass through the tunnel, the film shrinks into a tight conformal bundle.

The finished package is the same as an L-bar seal but there is no L-bar. These machines commonly run in continuous motion at speeds to 200 packages per minute or more.

Continuous motion requires that the product be fed in synchronization with the wrapper. Lug chains are used in some machines. Other machines use servo driven conveyors with sensors to maintain synchronization.

Folded film is pulled off the roll. Some lower speed machines pull the film with the saide sealing rollers. Higher speeds will require a motorized unwind to avoid excess tension on the film and/or slippage in the sealing rollers. A pinwheel roller perforates the film as it unwinds. This is necessary to allow venting during shrinking to prevent a pillow effect. Guides open the film and pass it over and under the conveyor.

The open side of the film is captured by a pair of upper and lower wheels. These wheels serve 3 functions:

The infeed pushes the product onto the film between the layers. The film is held open by guides. The sealing wheels and conveyor pulls the film with product through the machine, sealing the open side as well as cutting off excess material. After side sealing, the product is enclosed in a 3 sided tube.

A transverse or cross cutting bar seals the trailing end of the film, the leading end of the next package and cuts them apart. This cutting/sealing bar reciprocates vertically. On an intermittent motion machine no longitudinal motion is required. For continuous motion the cutting/sealing bars must be mounted on a mechanism that permits them to move lengthwise with the film as it is being sealed.

After sealing, the package passes to a shrink tunnel where heat shrinks the film conformally to the product. 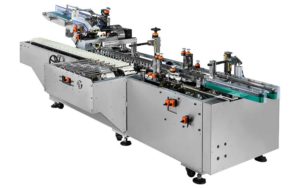 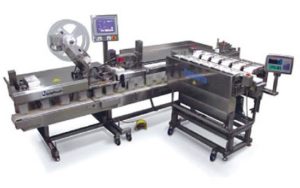