Plug and Play Accumulation, Orienting and Unscrambling Equipment In Stock and Ready to Ship Now

Types of Accumulation, Orienting and Unscrambling Equipment we currently have in stock:

See all Accumulation, Orienting and Unscrambling Equipment In Stock

The videos below are examples of the Accumulation, Orienting and Unscrambling Equipment Frain Carries

Generally, automated bottle orienters as discussed in a previous whitepaper are preferred for reasons of speed and ergonomics. On the other hand, sometimes they are impractical for a variety of reasons. When bottles have to be loaded on the line manually, unscrambling tables can be used.

Unscrambling tables take bottles from a mass of randomly organized bottles to single file for discharge to a conveyor. Occasionally, they will discharge in multiple lanes. Unscrambling tables also serve as buffers, accumulating a supply of bottles so that the operator doesn’t need to be loading them one by one.

Rotary unscramblers are sometimes called turntables. The problem with this nomenclature is that turntables can also be used for end of line accumulation or inline buffering. The only difference between the 3 applications is in the guiderail configuration. “Unscrambler” tells us that it is used for converting mass bottles to single file and “rotary” tells us that it does this via a turntable.

There are many ways to get bottles onto a packaging line and the method used is somewhat dependent on how the bottles come to the line. Bottle orienters will work however they come. They are designed to receive bottles in bulk, into a hopper then orient them neck up and single file onto the packaging line.

Virtually all bottle orienters begin with a hopper into which the bottles are dumped. The hopper is usually floor mounted with an elevating conveyor to raise the bottles to the orienter’s sorting disk. In other cases, the hopper is mounted above the orienter, sometimes on a second floor or mezzanine and feeds by gravity.

Bottles are metered into the rotating sorting disk and single-filed with neck either leading or trailing.

As they exit the disk, they are converted so the necks are all in the same direction, leading or trailing depending on the machine design. Some do this by capturing the bottles in grippers. A photoeye detects the bottle position and flips them over as needed.

Other common designs use a hook or, sometimes, a loop. If the neck is leading, it catches on the hook and the bottle flipped over. If the base is leading, the hook can’t catch and the bottle remains base leading. After the hook, all bottles are turned upright.

Still another style uses the centrifugal disk to orient lengthwise but has a series of cutouts profiled to the bottle. The bottles are directed into the cutouts and then fall vertically into a chute with the neck up, regardless of orientation in the cutout.

Small bottles may be fed using vibratory feeders. The feeder orients the bottle either in the bowl or using a secondary mechanism as the discharge. These are excellent for use in cleanrooms as vibratory feeders have no moving parts.

Several companies make orienters using robots and vision systems. One design uses a 3D camera in the robot arm to pick randomly oriented bottles out of a box or gaylord container. The camera directs the robot how to orient the bottle vertically before placing it on a conveyor.

Another design feeds the bottles onto a belt conveyor. The camera shows the robot the location and orientation of the bottle. The robot picks it and places it correctly onto the conveyor.

Some non-symmetrical bottles, such as “F” style bottles or bottles with distinctive fronts and backs will need secondary orientation. The bottles are oriented neck up onto a conveyor but the neck may be on the leading or trailing side of the bottle. An axial orienter is used to rotate bottles 180 as needed. 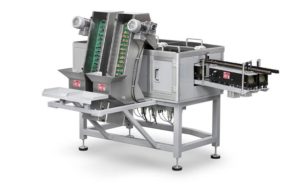 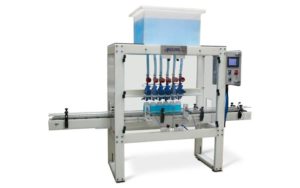