Types of Industrial Feeders we currently have in stock:

Call Us to Get Industrial Feeders ASAP

See all Industrial Feeders In Stock

The videos below are examples of the Industrial Feeders Frain Carries Vibrators are used in hoppers to break up clumps of product, prevent bridging and otherwise assist in gravity flow. These provide an undirected vibration and are outside the scope of this white paper. Vibratory feeders provide a directed vibration to move and orient products.

Other than back and forth vibration, vibratory feeders do not move. Unlike the jiggling vibrators used on hoppers, they cause the product to move in a controlled manner. They do this by combining both vertical and horizontal elements in their motion. They can be circular, generally called vibratory bowl feeders, or linear, often called inline feeders or vibratory conveyors.

Many packages will include coupons, leaflets, cards or similar. These may be dropped inside a carton or glued to the top or side of the package. Two types of feeder may be used for this. Both begin with the leaflets loaded into a magazine.

The belt feeder is generally best where exact placement is not critical such as dropping a leaflet into a carton. Some belt feeders have a perforated belt with vacuum underneath. Others rely in belt friction alone. As it passes under the magazine, the belt slides the bottom leaflet from the magazine. Guides prevent more than one leaflet at a time being pulled out. Subsequent top guides and sometimes powered belts, prevent the leaflet from slipping on the feed belt. At the end of the feed belt, the leaflet is discharged into the carton. When higher speeds or more precise placement are required, an orbital placing feeder may be a better choice. The magazine will usually be horizontal or inclined rather than vertical. A wheel or arms with rotating suction grippers rotates past the magazine. As it does, the suction cups pick up the outermost leaflet. As the wheel continues rotating, the leaflet aligns with the package and is released. An advantage of this tyle of feeder is that it can apply glue to the leaflet then positively apply the leaflet to the package as it makes contact. When there is a need to move bulk product from one place to another or one elevation to another, there are several options available.
Screw conveyors generally work best for powders or granular products and are occasionally used for semi-solid products. They can be designed for horizontal, angled or vertical mounting. Screw conveyors consist of a screw enclosed in a metal or plastic tube. Several types of screw are available. One style is a solid rod with screw flights welded to it. These are generally more efficient but are not flexible. Shaftless screws form the screw from a continuous strip or rod with no center shaft. Similar in external appearance and usage is a drag-chain conveyor. This uses discs attached to a continuous chain to move the product within a tube. A disadvantage to this style is that that it required a return tube, increasing the size of the system. 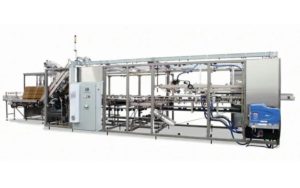 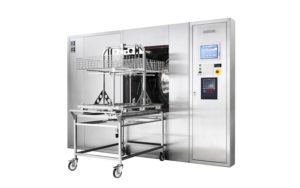 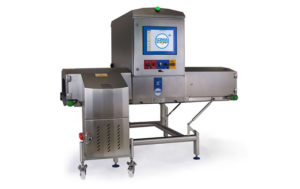